Snapchat – Snap Maps – What You Need To Know

On Wednesday Snapchat announced their new feature ‘Snap Maps’ (See here). The feature allows users to share their location and to access a Snap Map and see which of their friends are nearby (or indeed where they are!). The launch video (on the above link) suggests that the aim of this is for people to see if their friends are nearby,  see what they’re up to and potentially join in the fun.

Of course, as a result of this feature other social media sites are full of warnings to parents about Snap Maps such as the one below: 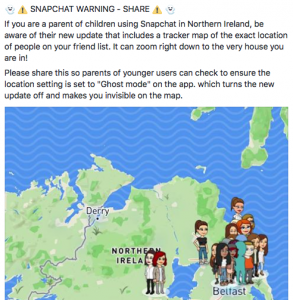 These posts are great for raising awareness but often take a scaremongering approach, encourage knee-jerk reactions to new features and don’t help parents (or those who work with teenagers) to actually think about how they can have conversations around privacy with young people.

This blog post will hopefully give you a better understanding of Snap Maps, any causes for concern that come with it, some positives and ways we can discuss this feature with young people.

Location sharing isn’t a new thing. WhatsApp and iMessage already allow you to share your location via a message, the social network FourSquare allows you to ‘check in’ to places (as does Facebook) and Apple’s ‘Find My Friends’ app has allowed users to share their location in real time with approved friends (other similar apps exist).

So is the Snap Map something to be concerned about for the young people we work with?

Mostly yes and a little bit of no. Here’s why…

Mostly yes…
Snapchat is primarily popular with those aged 11-24 which means many of the young people we work with will be using Snapchat and will probably have the new feature. The feature in itself is only dangerous when young people don’t know the people they are friends with and therefore grant access to their location to strangers (or people who’s identities they can’t verify).

The ‘always on’ nature of the feature (although it can be switched off) means that it allows people to work out when people are home and away (potentially posing a security risk).

and No…
Young people take risks online but they’re also clued up, young people will know whether they’re comfortable with the new feature and probably already know how to switch it onto ghost mode.

It’s also not all bad. If young people use it in the way Snapchat seem to intend then it may lead to young people spending more time with each other…what if a young person snapchats your youth group, their friends think it looks cool and then, using Snap Maps turn up ten minutes later?

What can youth workers do?

If you know your youth group regularly use Snapchat then why not spend some time discussing it with them…you could ask them:

*This doesn’t always mean only people they know in real life…many young people’s friends are both online and offline friends and young people often don’t distinguish the difference between the two.

Rather than launching straight into a talk/discussion around Snap Maps maybe have a wider conversation around Snapchat…discuss what your groups favourite filters are at the moment?, what filters have gone they wish they could bring back?, if they could snapchat from anywhere in the world where would it be?

If you want to keep reading about being online and how to talk to young people about it then you should read ‘Raising Children in a Digital Age’ by Bex Lewis. Available here.

Prividing quality Youth and Schools Ministry resources for free for over 10 years.

For our 100 Questions Youth App

This website uses cookies to improve your experience while you navigate through the website. Out of these, the cookies that are categorized as necessary are stored on your browser as they are essential for the working of basic functionalities of the website. We also use third-party cookies that help us analyze and understand how you use this website. These cookies will be stored in your browser only with your consent. You also have the option to opt-out of these cookies. But opting out of some of these cookies may affect your browsing experience.
Necessary Always Enabled
Necessary cookies are absolutely essential for the website to function properly. This category only includes cookies that ensures basic functionalities and security features of the website. These cookies do not store any personal information.
Non-necessary
Any cookies that may not be particularly necessary for the website to function and is used specifically to collect user personal data via analytics, ads, other embedded contents are termed as non-necessary cookies. It is mandatory to procure user consent prior to running these cookies on your website.
SAVE & ACCEPT